Clifton Mansion serves as the headquarters for Civic Works’ community service programs and as an important resource for the neighborhoods surrounding Clifton Park. For over 200 years, Clifton Mansion has anchored the Clifton Park communities. Now care of the Mansion is stewarded through Civic Works, with large scale restoration work being conducted by the Friends of Clifton Mansion.

The Clifton Mansion was originally built in 1802 as a Georgian style stone mansion, by Baltimore merchant Henry Thompson, who served as Captain of the First Baltimore Horse Artillery in the War of 1812. The building was later purchased by famed philanthropist Johns Hopkins, who transformed the mansion into a Victorian era Italian villa that served as his summer estate.

Clifton Mansion features an eighty-foot tower with a commanding view of Baltimore, an extensive porch arcade (row of arches) which wraps around three sides of the building. The entrance hall featuring a black walnut grand staircase, marble floor, intricate plasterwork, and ornate hand painted ceilings and walls, featuring a mural of the Bay of Naples.

The City of Baltimore purchased Clifton Mansion and its grounds in 1895 from Johns Hopkins University. It has been put to many uses ever since, including a headquarters for the Department of Recreation and Parks, and the clubhouse for the golf course. Although the Clifton Mansion fell into considerable disrepair during its years of transition, the building is being carefully restored by Civic Works and the Friends of Clifton Mansion. Renovation of the mansion will ensure the future of this Baltimore landmark and will also enhance the capacity of Civic Works’ programs.

Learn more about this unique Baltimore historic landmark! Contact John Ciekot (410-366-8533) or cliftonmansion@civicworks.com. You can also learn more about becoming a volunteer at Clifton Mansion.

Captain Henry Thompson, the mansion’s original owner, owned enslaved people and used their labor in Clifton’s orchards and fields and, presumably, inside the Thompson home.  Enslaved people and paid workers were both involved in building the first Clifton Mansion.

While Johns Hopkins was widely believed to be an abolitionist, new research shows that he also owned enslaved people.

We are researching this early period in Clifton’s history in the hopes of learning more about the people who lived here and worked as enslaved individuals.  We invite researchers who may be able to help in this goal, as we want to reveal an increasingly full picture of the Clifton Mansion in our community story.

Make your special event all the more exciting by having it at the historic Clifton Mansion! Rent Clifton for your wedding, family reunion, corporate event, or other special occasion, and support Civic Works’ stewardship of this historic structure. For more information, contact Jayna Powell at jpowell@civicworks.com. 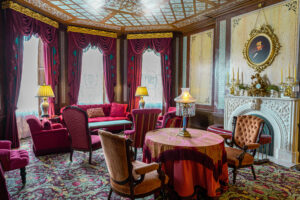 Join us as we reveal newly renovated spaces and share the architectural gem that is Clifton Mansion! Our legacy tour guides are ready to “walk” you through the mansion from roadway to hallway to rooms to tower: from the War of 1812 to the 1850’s up to the present! And you don’t even need to step onto the property or wear a mask! You can see and experience the splendor of the mansion, the new restorations, the history and what is to come from the comfort of your home on a Zoom Meeting! While the tour is primarily about the building, you will also hear about the men who lived within these walls, Henry Thompson and Johns Hopkins, including their activity with the wars & commerce of the day that included slave owning by Henry Thompson and, according to the recent revelation, by Mr. Johns Hopkins. The tour will be presented and then a question and answer period will follow.

The Tour will begin at 10:00am. Tour will last approximately 45 minutes and feature a Q & A at the end to answer any and all of your burning questions.

RSVP in advance to www.eventbrite.com and get your tickets.

The Clifton Mansion Legacy Team is committed to bringing virtual tours on the Third Saturdays of every month until we can hold face to face tours in the hopefully near future.