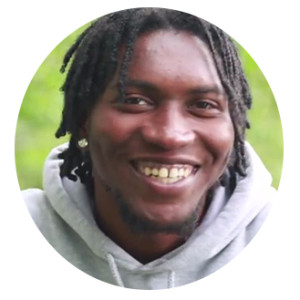 I’m doing it because I can help people in my neighborhood. It’s a unique way to make a difference – letting people know what’s healthy, what’s real food – Davon

Davon was born and raised in Northeast Baltimore.  After spending two years as a member of Civic Works Real Food Farm’s high school youth crew, Davon joined Civic Works as the farm’s AmeriCorps Mobile Farmers Market Assistant in the summer of 2013.  In his four years with the farm, Davon has gained a wide range of skills, from farming, harvesting, and composting, to customer service and public speaking.  The pride he takes in a job well done is evident.  Davon was featured on The Today Show as part of the Mobile Farmers Market team; selected to participate in a Boulder-White Clouds Mountains Retreat – a trip for urban AmeriCorps members, which expanded his view on the importance of protecting the environment; written about in the Huffington Post; and chosen to present at The U.S Department Of Agriculture. He continues to pull more than his fair share as a member of the Real Food Farm team.

According to Davon, “We are not just working but also saving lives, saving our community, and making Baltimore a better place one day at a time. As an AmeriCorps member with Civic Works, I am proud of the work we do.  Bringing healthy food options to neighborhoods with limited access to fresh produce and working on a farm to improve the environment are two ways I make a difference in my community.  This program has made a big difference in my life as well.  I’ve seen mountains, hiked in a national forest, been interviewed on national TV, and most importantly impacted my city in a meaningful way.  I’ve learned so much, and I feel prepared for what’s next.”

What is next for Davon?  He’s applying to college – first to Baltimore City Community College to focus on art (ceramics and photography) and then to MICA for the building blocks that will allow him to follow through on his dreams.  The experiences he gained as a Civic Works AmeriCorps member are opening doors to new opportunities. Davon’s career path may or may not include urban farming, but the skills and work habits he learned during his time at Civic Works— attention to detail, communication skills, problem-solving strategies—will help him with all of his future endeavors.