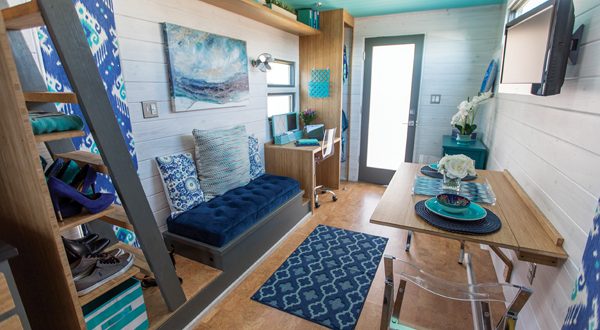 When interior designer Adrianne Kotula first laid eyes on the stripped-bare inside of the 200-square-foot tiny house, she thought, “It was pretty drab—a lot of earth tones with no pops of color. It almost looked like a dorm room. Of course, it’s a tiny space; I’m thinking, ‘What can I do to make it look larger?’” Kotula’s bigger challenge: transform the unfurnished, unadorned space of the sustainable, portable, cute-as-a-button-able home— built by the Baltimore nonprofit Civic Works—into something livable.

“The very first thing I found was the wallpaper, which I used as the backsplash,” notes Kotula, 36, who works for her family’s WPS Paint & Decorating Center in Abington. “That started my color palette. I always tell people, ‘Start off with something with pattern and color.’”

The pattern: tulip bulb-esque. The colors: aqua (“tropicana cabana,” in paint-speak) and navy (“champion cobalt”). “Once I picked that,” she adds, “it was easy to coordinate everything else.”

Constructed in 2015, the tiny house serves as a showpiece for energy-efficient living for all homes—new or old, gargantuan or Lilliputian—spreading the green gospel at local festivals, churches and schools as the city-sponsored Mobile Energy Education Center. (Baltimore City purchased the house from Civic Works not long after its completion in fall 2015.)

“It is built to be entirely off-grid,” says Stein, 58, “and even if you wanted to be on-grid, because of its size, because of its energy-efficiency features, the solar panels, our estimate is that the utility cost per month would be about $50.”

Purchase price for a comparable prebuilt tiny house—minus “bells and whistles,” as Stein calls them, such as the bamboo and plywood cabinetry and “cool” roof: $50,000, including a trailer, which turns the home into a teeny-weeny RV.

Tiny house mania has gripped cable TV and the blogosphere in recent years, with shows like “Tiny House Nation,” “Tiny House, Big Living” and “Tiny House Hunters,” and a blizzard of national and regional blogs, notably “The Tiny Life.”

“I think the popularity of tiny houses speaks to the fatigue many have to the complexities of modern American life,” says designer Hong, 45. “In some ways, it’s a reaction to how the American dream has become defined by suburban McMansions, by excess, long commutes and high mortgages. It’s a simpler life—free of mortgages, costly maintenance and clutter.

“And it affords you the freedom to roam—to live anywhere and move anywhere anytime, whether it’s near your work or in the wilderness. It is the pinnacle of efficiency, requiring less cost, less energy, less possessions, low carbon footprint—all without sacrificing quality of life.”

Kotula sought to impart such a quality-of-life quotient to the Civic Works house with her makeover: Bold colors to define the space, including its ceiling. Prints that make the boxy space feel homey. Functional accent pieces. Clear desk and table chairs that exude airiness. Floor-to-ceiling window treatments that emphasize height. A consistent color combination for cohesiveness.

“The paint that I used, Natura from Benjamin Moore, is a 100 percent green product,” Kotula points out. “I felt that it was important that I be as green as I could.”

The tiny house’s innate greeness, in fact, ranks among its most appealing attributes. “If someone likes the idea of sustainable living—that is, living in a very energy-efficient way—it’s perfect,” says Stein. “Also, it’s portable. For a person who travels a lot, they can move about the country.”

Which, for the moment anyway, you’d probably need to do, given that, legally, you can’t live in such a tiny house in Baltimore City because it violates existing building and zoning codes, although Stein notes that several city agencies are working to amend those codes. “In a couple of years,” he predicts, “tiny houses will be allowed as a matter of right,” both locally and globally. (Codes regarding the permissibility of tiny houses vary from municipality to municipality in the U.S.)

Civic Works has received inquiries about building additional tiny houses from organizations that provide transitional housing for the homeless and for youth aging out of foster care. “Once the code changes are made, I won’t say the market will explode for these, but there will be significant interest,” Stein says, “so we could conceivably build a couple a month, which serves our mission of job training.”

Hong envisions tiny houses offering both social and economic benefits, while acknowledging that living in one “certainly is not for everyone. Younger adults starting out can easily adjust to tiny living, but it also is attractive to empty-nesters and older singles who want a change. I think the most exciting part is that tiny houses may become an innovative solution for affordable housing. As a housing type, it can provide high-quality homes for those who cannot otherwise afford to buy a house, perhaps even enabling them to live in better neighborhoods than they would otherwise be able to. And with a house on wheels, its social mobility aspect may prove to be the most powerful draw.”

For now, however, tiny houses remain an appropriately tiny niche market, perfect for one person, maybe two people who are not homebodies. “If you had two people who were in there all of the time,” admits Stein, “they might drive each other a little bit crazy.”