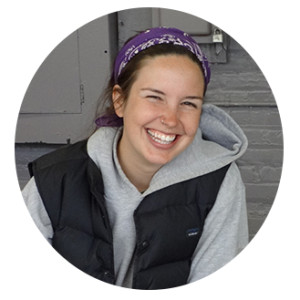 I now see Baltimore as the multi-dimensional, constantly changing, and constantly flourishing city that it is. I feel so grateful to have been able to spend a year giving back to a community that has done so much for me. – Lauren

When I first arrived for my interview to join the Community Lot Team at Civic Works last October, I was quickly whisked away from the office and out into the city of Baltimore. The team supervisor, Ed Miller, wanted to show me, not just tell me, what exactly the Community Lot Team did. Right away we were traveling through parts of the city where I had never ventured, driving past beautiful green spaces that the team had created in previously forgotten and overlooked vacant lots.

After the initial tour, one lot in particular stood out in my mind. In the small neighborhood of Darley Park, tucked amongst winding one-way streets, the team had just begun to transform a vacant lot on Normal Avenue. The lot itself was adjacent to an alleyway that saw significant amounts of foot traffic through the neighborhood. At this time in October, some initial hardscaping had been done, but the lot to me appeared to be nothing more than rocks and dirt, littered with piles of trash. Mr. Miller then proceeded to tell me that this lot was the first of what he was calling The Dead Zones Project, and that a few months previously, a nine-year old boy had been murdered in this very alley way. To me this lot on Normal Avenue encapsulated what I, at the time, believed to be “normal” in the city of Baltimore.

Nearly ten months later, as I approach the end of my term as an AmeriCorps volunteer, I have learned that the Community Lot Team is not only working to transform vacant lots, but to transform what in fact is “normal” here in Baltimore. A few weeks after the start of my term, Katey Truhn and Jessie Unterhalter, two local artists, completed a mural in the tiny alleyway of Normal Avenue. The mural, a vibrant and bright mandala that seems to bring great light to such a dark place, is a perfect backdrop for the beautiful garden that has grown where there was previously only dirt, rocks and trash. We planted flowering shrubs, green grasses, and tall narrow trees along a woodchipped pathway for people to walk through and enjoy the space. That small alleyway is now a sacred place for people not only to reflect on the past, but also a place for people to look forward to a brighter future.

The last time we visited Normal Avenue, a trashcan had been placed in front of the site. A clear shift had occurred: neighbors were no longer strewing trash throughout the alley, but were putting in a genuine effort to keep the lot clean and beautiful. More importantly, the desire for this beauty to spread throughout the neighborhood was apparent. Recently, residents from the neighborhood approached us about helping with another vacant lot just a few blocks over.  Although the Normal Avenue site was a small lot, with a small garden, in a small neighborhood, the effects of bringing beauty and life to that lot are clearly causing not-so-small results.

As for me, the results of my time as an AmeriCorps Volunteer have also been anything but small. The time I have spent with Civic Works has greatly impacted my perspective of Baltimore. I now see Baltimore as the multi-dimensional, constantly changing, and constantly flourishing city that it is. I feel so grateful to have been able to spend a year giving back to a community that has done so much for me.